All that technical stuff

Why does it seem like every time computer companies move to increase security for users against hackers, the hackers are not stopped, but the users are? 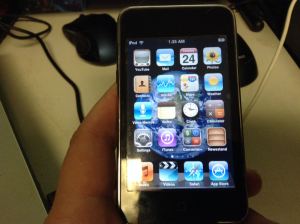 Well, the above picture is of that iPod.  It was not taken before it took the sink bath.  It was taken early Tuesday morning after I plugged it in on a lark to see what, if anything, would happen.

The last time I even looked at this thing, the screen was dark and it would not even acknowledge that it ever had a battery charge, or any function whatsoever.  And I did nothing to it.  I did not put it in rice to dry it out.  I didn’t even keep it in a dry place to dry it out.  Heck, I left it in a damp basement.

Now, I am not an Apple snob.  I prefer PC’s over Macs, and Android over iOS (especially iOS7).  But, I have to give Apple credit for building a device that is sturdy enough to endure what this particular iPod went through.

That being said, iOS7 is not going anywhere near this newly resurrected iPod.

Friday, I had a brief mention of iOS7.  Now that I’ve had a chance to check it out a little bit further, I had a few observations.

END_OF_DOCUMENT_TOKEN_TO_BE_REPLACED

So I caved in and bought a new iPod Saturday.  It’s a real nice 5th Generation one.  Of course, since I work Saturdays, I did have to wait until I got home before I started to set it up.  In that, I learned a few things.

First, Apple’s iCloud, or whatever they call it, had a back up of my old iPod, one that was fairly up to date since I had synced it that night prior to it taking a dive… literally.  Thus, a lot of the apps I had on the old one were put onto the new one.

The second thing I learned is that I have a lot of music on my computer, and since I want to have all that music on my iPod, it takes a while to put all of that music on there.  I’ve already had it running all last night and most of the day, and again tonight (I had to stop the sync because we were going out and I did not want it running then — call me paranoid about that).  As I’m writing this, there are still 700 tracks to move on, and that was after I cut down on what was being copied (no radio shows, podcasts, television shows).

Those of you who read my Picks of the Week post may remember that I had an issue with my laptop.  For the record, the problem is either the back light, the inter-something or another, or the screen itself.  I am thinking not the screen so much since everything was still working on the screen, it was just dark.

Anyway, a busy schedule and and impending bad weather is preventing me from having the issue diagnosed and repaired until Monday at the earliest.  So, I did the next best thing and bought a new monitor to work with the laptop until I can get it fixed.

Right now I have the new monitor in and I have to say I’m not sure if I want to stop using the monitor with the laptop.

Dear “Private Number”
I want to thank you for calling my cell phone this morning. I’m sorry I could not answer since I was otherwise occupied. I would return your call, but you left no message and since you’re showing up as “private number” I have no means of reaching you.
Which leave me to wonder, was your call really all that important?

I encountered something today that made me really start to think that I need to upgrade my laptop.  It did not want to access the internet.

I am a casual computer user.  I use my laptop for games and writing mostly.  When I got it in 2007/2008 (it was Christmas time), it was probably the best laptop I could get at Best Buy.  It was a gamer’s laptop with its own graphics card.  Not one of those built-in laptop cards, but a legitimate Nvidia graphics card.  I could play Bioshock on it, which I did.  But like most, okay all, computers from 2007, it has become functionally obsolete as a gamer’s laptop.  It can still handle World of Warcraft and City of Heroes, but the last game I bought for it was Lego Star Wars: The Complete Saga.  I had toyed with the idea of replacing it.  Toyed really the right word for it.  In my mind, it still functioned, so there was not much need to replace it.  Besides, I have a Sony Vaio desktop that is even older than the laptop and I’m still using it… for iTunes and the occasional surfing of the internet.

Then today happened.  I could not access the internet.  From what I could tell, everything seemed to be working for networking.  But it really was not.  Even scarier when I thought it was working just the night before.  I tried all the usual attempts to revive the connection, none of which worked.  I even scoured the internet (on the archaic desktop that still was connected to the internet) to find an answer.  Most of the answers I saw I understood enough to know that I understood them enough to make things worse.

Naturally, I did what any person who knew just enough to break something further would do: I asked someone who knew more than me.  That would be my dad.  He was the reason why I grew up around computers because he has worked with them as long as I’ve been alive.  He is the reason why I know what a TRS-80 Model 1 is, and that Osborne made the first portable computer… which weighed a ton.

Together, we tried just about everything just short of physically dismantling the computer.  Yet, no internet connection.  Heck, as near as I could tell, I did not even really have a network connection.  Nearly admitting defeat, I resigned myself to trying one last thing.

I always saw system restores as the ICBM of computer resolutions.  When all else fails, you try one last-ditch effort to revive your computer my reverting it to an earlier time.  Usually, this point is the last time there was any major software changes.  In my case, that was August 17, 2012.  In my last-ditch effort, I would make the compute think that it was starting up as it did on that day in the past… or something to that effect.  I had no idea if that would even work.  For all I knew, there was something physically wrong with my computer, that the summer heat damaged the network cards, both wired and wireless.  Heck, for all I knew, there really was just one card for the two, and it was shot to Hell.

I did the restore and waited.  The laptop restarted and completed the necessary processes to make it think it was August 12, 2012.  And then it continued to the login screen.  I logged in cautiously and watched as the network icon in the tray displayed the double computer, first with the yellow triangle exclamation point.  And then, with the little globe.  The restore had worked, and my laptop was once more connected to the internet.

I am still not even sure what happened between last night when I shut down and today when I turned my laptop back on.  I am not even sure that this will not happen again.  It may, it may not.  I don’t know.  But it made me think real seriously about the possibility that I need to get a new laptop, just in case something like this happens again.

Which I hope it doesn’t.