5 Games I Want To Play On International TableTop Day

International TableTop Day is April 5th.  It is a day dedicated to playing board and card games.  And I actually asked for the day off from work so that I can attend one of the events locally.

Naturally, as a wannabe gamer, there are a whole slew of games that I want to try on this day to honor gaming.

For the record, Ascension is a fantasy-based deck building game where players start with a small deck of simple cards and proceed to expand their deck by buying more powerful cards while defeating monsters for points.

But, I have yet to play this deck building game against real people with the actual cards.  I don’t really care which version I try, I just want to try it out at least once against someone else (or even a couple of people).

What Ascension is for fantasy deck builders, Nightfall is for vampires and werewolves.  Like Ascension, I have played the iOS app version of this game which has only fueled my eagerness to try this deck builder out for real.

Unlike Ascension, Nightfall puts players in direct conflict with each other.  Take too many wounds and you lose the game.  In addition to the starter cards each players has, they have the opportunity to purchase more powerful cards from a central pool.  Players also have access to two sets of cards that only they can purchase, which can give players an edge over their opponents… if they get the right cards, and they know how to play them right. 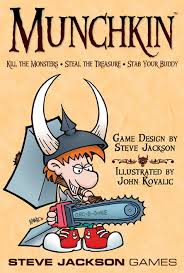 Munchkin is a classic card game from Steve Jackson Games with a number of variations out there.  The goal is to reach level ten by defeating the appropriate monster.  Along the way, you can ask for help from your fellow players.  But beware, they can backstab you to further their own goals.

One of the two possible locations that I may go to for TableTop Day actually has a representative from Steve Jackson Games come in on the first Saturday of the month to demonstrate various games.  Most likely, Munchkin, or one of its variations, will be on the list for that day.

Sentinels of the Multiverse

Sentinels of the Multiverse is part role playing game, part card game.  Players assume the roles of superheroes working together to defeat various villains.  The whole concept of playing a superhero appeals to me.  I have played Marvel Legendary solo, and played the recently released stand alone expansion for DC Comics Deck Builder Game.  Both of these games are deck builders, but from what I’ve seen of Sentinels, it is more role playing game than deck builder.

It seems quite likely that this game will be played on International TableTop Day since they just recently released a new expansion to the game.

This is a fairly recent addition to my collection, and one that takes a fantasy setting and twists it just a little bit.  Players assume the roles of fantasy heroes settling into a fantasy inn.  And, as you would imagine in a tavern, players are buying drinks for other players and gambling for gold all in an attempt to stay sober longer than everyone else.  If you drink more alcohol than your stamina allows, you pass out and are out of the game.